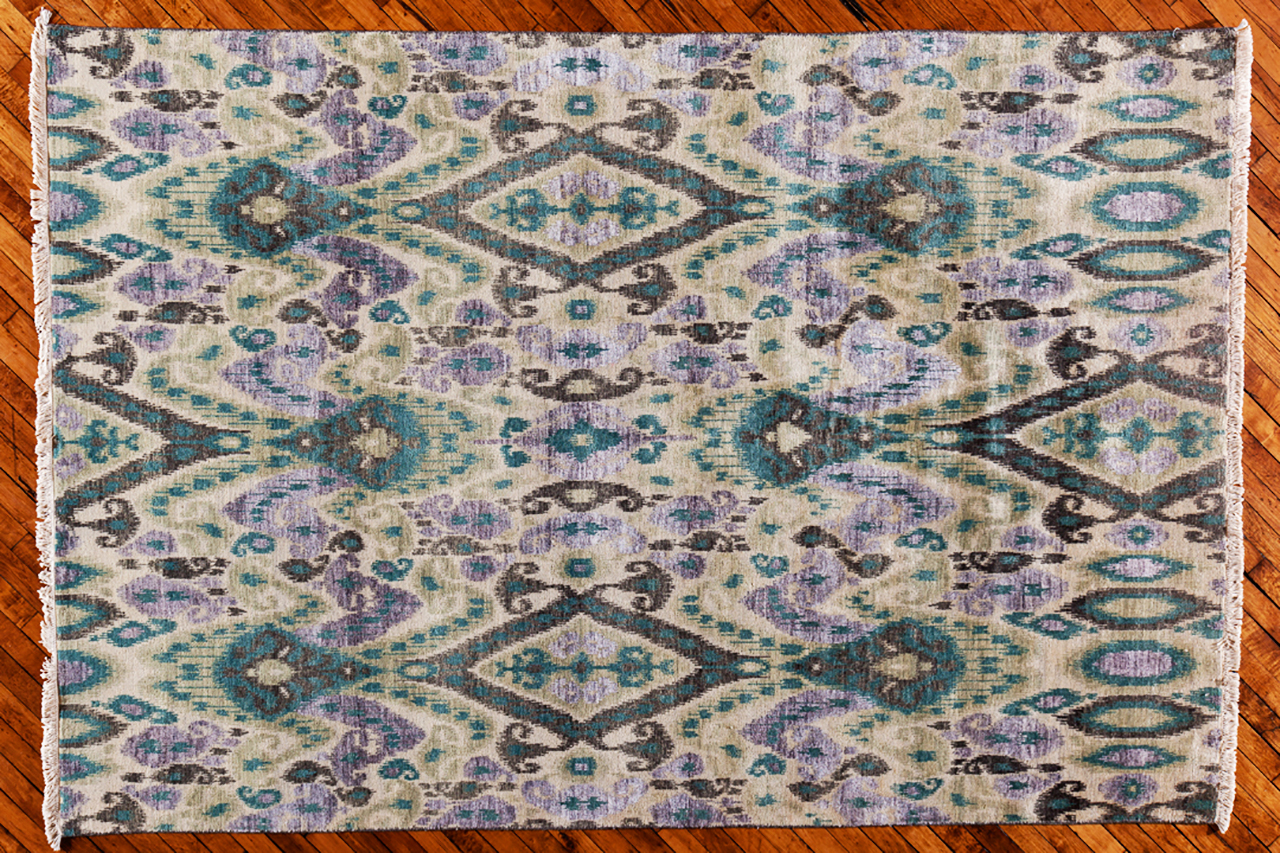 By admin
No comments
2 likes
blog

We have seen that one of the ‘revolutionary’ aspects of modern rug production has been the return of natural dyes. Not long ago, shoppers who were interested in new rugs (or who couldn’t or wouldn’t spend the money to buy antiques or semi-antiques) had no choice but to buy rugs with synthetic dyes. Today, though, natural dyes are an option in new rugs and, in fact, you will have to decide between natural and synthetic dyes if you buy one. The choice is important because, aside from everything else, natural-dyed rugs cost roughly 30 percent more than synthetic-dyed rugs. Let’s look closely at oriental rug dyes and how they compare.

You will find that I use several words for natural dyes: ‘natural’, ‘vegetal’, and ‘vegetable’. I prefer ‘natural’, but use the others simply because I get tired of typing out ‘natural’ time after time. ‘Vegetal’ and ‘vegetable’ are slightly misleading because one natural dye, cochineal, is made from an insect and is not vegetal at all. Once a manufacturer of Turkish kilims told me proudly that she makes her rugs from ‘organic’ dyes. I seemed to remember from high-school chemistry that ‘organic’ refers to any material that is carbon-based, and I questioned her closely about organic dyes. She admitted that she bought the dyes from a Swiss dye maker. I’m still not clear what ‘organic’ dyes are, exactly, but something tells me that they are not mixed from roots.

Rugmakers of the Middle East and Asia have used natural dyes for thousands of years. In the classic model, weaving is done most often by women and dyeing most often by men. In some important rug-weaving areas of the Middle East, dyers make reds from dried, ground madder root and (less often) from cochineal, blues from indigo, yellow from weld, green from sequential dyeing in indigo and weld, brown and camel from walnut husks, other colors from many other vegetal substances. Every area has its own indigenous materials from which dyes are made.

Some dyeing takes place in two steps. First, in a process called ‘mordanting’, yarn is dipped into a hot solution of alum or iron, which prepares wool fibers to bond permanently with dye. Then the yarn is placed in vats of hot dye where it is cooked for shorter or longer periods of time and at higher or lower temperatures, depending on the dye and the shade desired.

Natural dyes are expensive in the sense that they take a lot of time: time to pick or dig up, time to dry, grind, and finally seep. Some, like natural indigo, must be dyed repeatedly to obtain permanence. But when vegetal dyes have been handled correctly, the colors they produce are wonderful. Colors are usually saturated without being edgy or harsh. They seem to glow. Even in skeins of yarn not yet woven, naturally produced colors are simply beautiful.

One writer (Reinhard G. Hubel, The Book of Carpets, New York 1970) suggests that Persian weavers do not really deserve their reputation for having a wonderful sense of color, because, with such gorgeously colored, naturally dyed yarns at their disposal, no weaver could possibly go wrong using any combination of colors in a rug! Dr. Harald Bohmer, the father of the natural-dye revival in the 1980s, puts it this way: “Out of yarn dyed with natural dyes, it is impossible to create color combinations that seem grossly disharmonious.”

But why should this be true, and not true of synthetic dyes? While the primary synthetic dyes are absolutely monochromatic, each natural dye has elements of all the primary colors. Madder, for instance, besides its dominant red hue, also reflects blue and yellow. This has two important effects, one of which is that natural dyes—madder, indigo, onionskin yellow, etc.—all look good together. “The integration of neighboring colors within each dye has a harmonizing effect; natural colors are already harmonized in and of themselves,” Dr. Bohmer says. The second effect is that the presence in each natural dye of all three primary colors inclines them toward black, which would result were they all mixed together. “The presence of all three primary colors in each natural color brings about a shift toward black that, in turn, softens the color’s intensity.” So natural dyes harmonize and soften, and that, in the main, is why they look so good.

Beyond that, natural dyes produce colors in Oriental rugs that are charmingly variegated. This is most easily seen in natural greens, which show flecks of blue and yellow (from which green is composed). But a close look at most rugs with natural dyes will show you that none of the colors is quite unifonn. Why is that? Part of the phenomenon is due to the irregularities of handspun wool (as we shall see), which is often used along with natural dyes; and partly to the association of natural dyes with small productions in which only tiny lots of dye are mixed at any one time, each of which is slightly different from the others. Furthermore, natural dyes are a bit transparent because they are not absorbed by wool as thoroughly as synthetic dyes; hence the color of the wool shows through the dye and adds to the variegated look. The net effect of all this pleasing irregularity of color is a rug that is vibrant, never mechanical-feeling: it gives an impression of character.

As far as practical considerations are concerned, natural dyes are phenomenally stable. Museum collections contain 400-year-old pieces whose colors are almost unbelievably vibrant. They resist fading in sunlight and they resist running when exposed to water. In other practical respects though, natural dyes do have drawbacks. They are expensive, hard to work with, and time-consuming. For rugmakers wishing to produce rugs ‘in continuity’ (that is, a number of different rugs in all sizes, with absolutely consistent colors) natural dyes are impossible, because results are inconsistent and unpredictable.

Synthetic dyes were invented in the 1860s, and a class of dyes known as aniline was in use in the Middle East in rugs by 1900. The early synthetics were wretched things that nearly ruined the Oriental rug industry. A perhaps apocryphal story, repeated in probably every rug book written in the last seventy-five years, has it that at one time a law was made in Iran banning the use of synthetic dyes at the cost of the miscreant’s right hand. But the use of anilines continued. Some early synthetics bled when exposed to water, others faded radically, some changed colors with age, and certain colors (notably a harsh orange) never lost their hard-as-nails edge. We would all be better off, I suspect, when considering synthetic dyes in new rugs, if we could simply forget about the failures of these early anilines. Our dislike for them should never extend to the next generation of synthetics, which are far superior. We would also be better off if we could forget our almost universal prejudice toward anything ‘synthetic’. The word carries a pejorative connotation unfair to the synthetic dyes currently in use.

This new class of dyes was in use in the Middle East by around 1940. Mordanted with potassium bichromate, they are known as chrome dyes. They have now been in use for more than fifty years and are nearly perfect. They are cheap and easy to use. They produce an enormous range of consistent colors that are fast in water, resistant to fading, and non-corroding to wool. It is often said (especially by old-rug fanciers) that chrome dyes are too good — that they are so unyielding to light and time that they will never soften and acquire the mellow patina so esteemed in antiques. As a dealer who has washed rugs for the past thirty-three years, I have had an excellent opportunity to observe how rugs of all kinds, including those with chrome dyes, have aged. The news is good. I’ve been surprised to find that almost all those made with chrome dyes in the past fifteen years or so come back from washing looking very lustrous. Their colors have softened in a pleasant way. I would single out Indian rugs as aging especially nicely, and Romanian rugs as well. Nearly all rugs with chrome dyes are growing older just as we like them to. (I am less happy with chrome-dyed rugs of a slightly earlier period. Certain Persian rugs of the ’70s have shown disturbing tendencies to fade even in weak, indirect sunlight.) One complaint natural-dye enthusiasts voice about Oriental rug colors crafted from synthetic dyes is true, though. They do not have the variegation natural dyes impart. For instance, no synthetic green has the ‘flecky’ character of a natural green. Is that important? That’s a call you will have to make.

Now, having spent some time pointing out the differences between natural and synthetic dyes, I have to admit that quite often it is impossible even for an expert to tell the difference between them without chemical analysis. Yes, there are certain colors from early dyes that are clearly synthetic: I have mentioned a particularly irritating orange. But modern chrome dyes are another matter. How can you tell the difference between them and natural dyes? Sometimes you can’t, short of sending samples to a laboratory for analysis. Even experts often disagree as to whether a particular dye in a rug is natural or synthetic.
The above is an excerpt from an article originally published at internetrugs.com